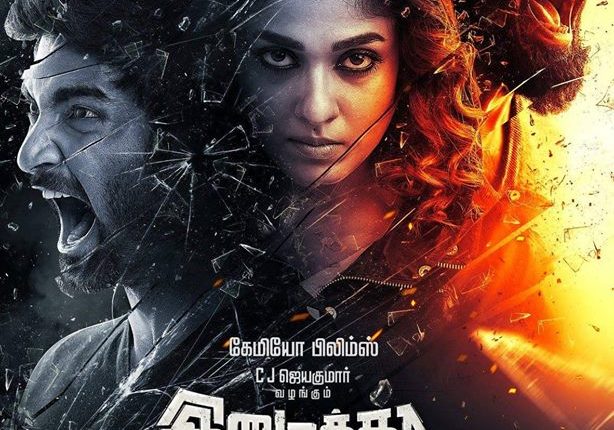 Imaikka Nodigal has everything in it you look out for in a thriller despite the fact that the killer is revealed at the very beginning phase of the film. An underwhelming and half baked romantic track that fails to getgoing is the only weakness and flaw in an otherwise engaging thriller.

With some energetic and lively preformance to its credit from the psycho villain aided by the heavy screen presence of the leading lady, Imaikka Nodigal directed by Demonte Colony fame R.Ajay Gnanamuthu is a winner that has enough nail biting and riveting moments to keep the audience on their toes.

A series of gruesome murder happens in the city and the killer sends his voice clip claiming that he is Rudra the psychic killer whom everybody thought was killed by Anjali, an officer from CBI. After that its a cat and mouse game between Anjali and Rudra that goes on till the very end with some interesting turn of events shaping up towards the finishing stages. In the process, the film opens up some thrilling moments making the whole setup interesting, eventful and lively.

Films that divulge or reveal the murderer very early on is on a sticky terrain. There is the element of risk involved in such stories. So unless the screenplay offer that extra edge with some spine chilling sequences and convincing twists, there is every chance of the film failing to engage and thereby limiting the potential of such a plot. It is here that Imaikka Nodigal has scored. The packaging of the whole screenplay (except the love track) is smart enough eventhough we know who is the antagonist.

As I said, one of the glitch is the unimpressive romantic track between Atharvaa’s character Arjun and Krithika played by Raashi Khanna. Same was the case of the scenes involving Vijay Sethupathi and Nayanthara but these were saved by the actors who stood up when it mattered. These phases were overstretched that ultimately extended the running time of the film to almost close to three hours. Had some fifteen to twenty minutes of the film had been trimmed, Imaikka Nodigal would have been more crisp and on a different level.

Even with these lacklustre portions, the film engages you and a major credit for that goes to the execution and also couple of impressive performances which I am going to talk about next.

So the psychic killer here is Bollywood director Anurag Kashyap. We all know he is a director of high calibre. But the guy surprised everyone by giving us a glimpse of his acting credentials in Akira, a Bollywood film directed by A.R.Murugadoss. He has done cameo roles before Akira but the police officer in Akira was a surprise package. Believe me, Rudra the serial killer is one of the best effort we have seen in a negative role in recent times. The guy had that menacing look, expressions and body language demanded for that character.

At one of time, it was as if Nayanthara was getting sidelined and overshadowed by The Kashyap Act. Had it been some other actress, the character of Anjali would have failed to get the attention but the actress was able to come out of that Kashyap influence through her terrific screen presence.

Atharvaa as Arjun couldn’t make much of an impact.He was notable only towards the end and his love track didn’t get the required mileage. Raashi Khanna was reasonably okay considering the limited space she had in the film. Rest of the supporting actors like Devan didn’t have anything substantial to do. Vijay Sethupathi appeared in a cameo.

Background score is one aspect that can give a different dimension and feel to even average looking scenes. This movie was fortunate to have been benefitted by effective BGM from Hiphop Thamizha. Cinematography was decent enough but the cuts demanded more attention to reduce the duration from the current running time of 170 minutes.

Though the film suffer from bad writing (obviously it’s the romantic phase) and leaves some questions unanswered towards the end, Imaikka Nodigal is a decent and convincing thriller that can keep the attention of the audience without deviating from its focal point.

Get real time updates directly on you device, subscribe now.

This website uses cookies to improve your experience. We'll assume you're ok with this, but you can opt-out if you wish. Accept Read More